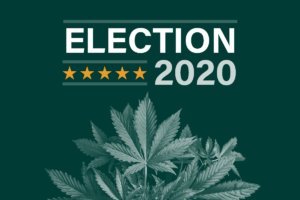 The Republicans didn’t even write a new platform.

And the Democratic platform fell short of supporting the efforts congressional Democrats have made in the past year toward federal marijuana legalization and cannabis banking reform.

Nevertheless, Washington DC lobbyists and industry experts expect Democratic lawmakers – regardless of the election outcome – to push forward with a pro-marijuana reform agenda.

By contrast, President Trump, if reelected, is likely to be satisfied more by the status quo unless politically motivated to act otherwise.

And if Democratic challenger Joe Biden, who seems very reluctant to embrace marijuana, wins the presidency?

“With Kamala Harris as the V.P., I think she’ll pull Biden along,” said David Mangone, director of policy and government affairs for The Liaison Group, a Washington DC firm that lobbies for the National Cannabis Roundtable.

Mangone and others noted that the California senator is the lead sponsor in the Senate of the MORE Act, a social justice-focused measure that would legalize marijuana federally by removing it from the Controlled Substances Act.

A U.S. House panel advanced the measure last fall, and the full House is expected to vote on the bill in September, according to media reports, which would mark a historic development for federal marijuana reform.

And if Trump retains his office?

Experts believe he might continue to embrace a relatively hands-off enforcement approach toward state-legal markets – as seen by his two attorney generals since 2016.

But experts also believe Trump would be politically sensitive to the increasing number of Republican states legalizing MJ.

One of the more intriguing stories of late is Trump’s reported concern about state marijuana legalization initiatives on the November ballot and how they could attract young voters who could sway close senate and presidential races in Arizona and Montana.

Party platforms are largely symbolic in nature, so experts weren’t surprised that few concrete details came out of the recent Democratic and Republican national conventions.

“I think it is Joe Biden not wanting to give President Trump and the Republicans anything to attack on,” said Michael Correia, director of government relations for the National Cannabis Industry Association. “This is one issue that they’re going to try to be as vanilla as possible.”

Mangone characterized it as a “narrow” platform for a candidate who, above all, is running to “undo what Trump did.”

The 92-page Democratic Party platform devoted all of one paragraph to marijuana. Here are the succinct points:

In addition, the Democratic platform said, the U.S. Department of Justice shouldn’t prosecute conduct that is legal at the state level.

Mangone and Correia read “rescheduling” as mostly opening a wider path for medical cannabis research rather than significantly helping the industry.

The platform didn’t mention cannabis banking, which the U.S. House overwhelmingly approved in fall 2019 and them recently included in the $3 trillion coronavirus stimulus package it passed.

Mike Kennedy, co-founder of Green Check Verified, which provides cannabis banking software and services, said “it was a little disappointing that (marijuana banking reform) is not on the forefront of any of the platforms.”

But Kennedy said he understands cannabis banking reform advocates are still “gung-ho” about getting the SAFE Banking Act or similar legislation passed through Congress. The measure would enable financial institutions to serve marijuana businesses without fear of federal reprisal.

Mangone said cannabis banking reform is still alive in terms of the stalled negotiations over the next coronavirus stimulus package. Advocates have cited the banking measure’s low price tag and ability to help with the economic recovery.

Although Mangone predicted Harris would be a positive influence in marijuana reform if Biden wins, the issue is unlikely to be a priority in his first 100 days in office.

“There’s so many other issues that the two want to tackle first,” Mangone said. “(Democratic) folks are supportive of reform, but it rarely cracks their top 10 or even 20 issues.”

Trump is considered more of an enigma.

In 2018, industry officials put a lot of stock in a comment Trump made that he “probably” would support legislation such as the STATES Act that would give states control over whether to legalize marijuana.

But Trump’s comment was sandwiched in between the appointment of two attorney generals – Jeff Sessions and then William Barr – who were decidedly anti-marijuana, at least in their personal views.

“Trump’s rhetoric wasn’t bad – it was who he decided to appoint to AG,” Correia said.

Sessions threw the marijuana industry into a panic when he rescinded the Cole Memo, an Obama-era policy that protected state-legal marijuana businesses from federal prosecution.

Ultimately, Sessions didn’t crack down on the industry in a substantial way.

Trump fired Sessions in late 2018 and replaced him with Barr, a former AG during the war on drugs.

Barr pledged a hands-off policy toward state-legal businesses, but then interfered with the industry by allegedly ordering politically motivated investigations into cannabis mergers.

Mangone predicts there could be more of such “soft enforcement” if Trump is reelected.

Reports about Trump’s focus on MJ ballot measures are based on a recent event in which he chided former Wisconsin Gov. Scott Walker for narrowly losing to Democratic challenger Tony Evers in 2018.

Trump suggested that a nonbinding marijuana referendum brought out so many Democrats to vote that Walker lost his bid to become a third-term governor.

Mangone said the anecdote suggests Trump is aware of the potential political magnitude of marijuana legalization initiatives “and certainly is eyeing Arizona and Montana as two key seats to keep the Senate majority” – not to mention for Trump to win.

Arizona and Montana residents will vote on adult-use legalization in November.

Jeff Smith can be reached at [email protected]